You are here: Home1 / Uncategorized2
PreviousNext 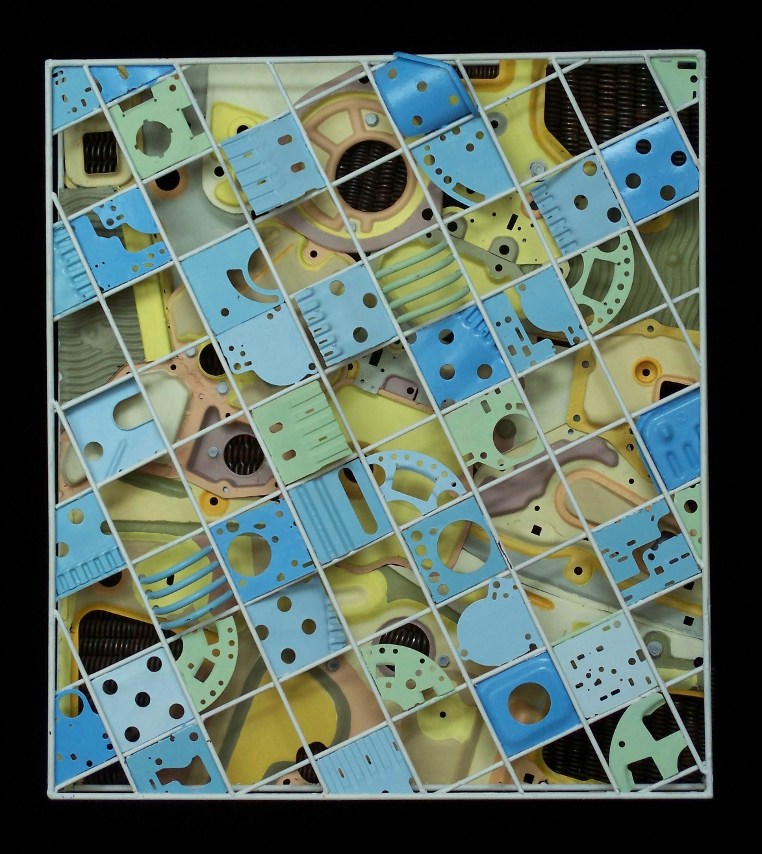 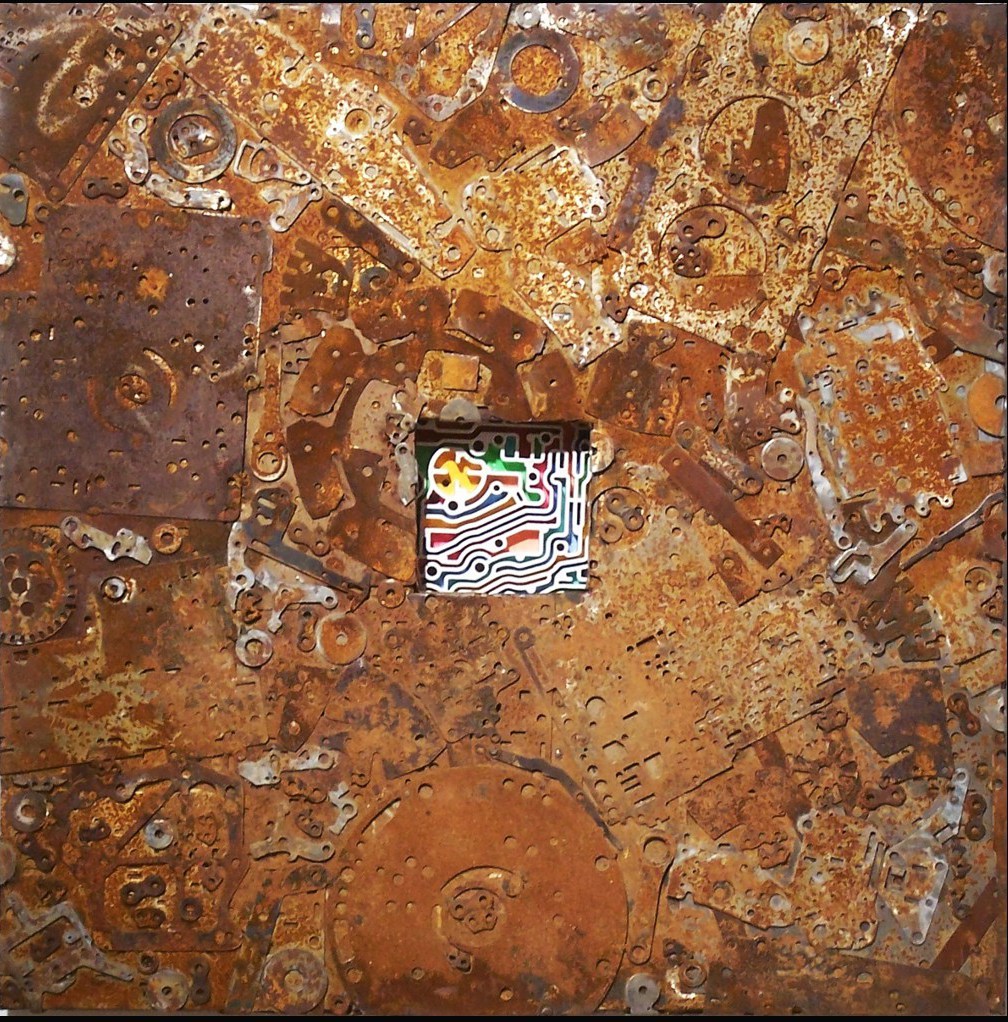 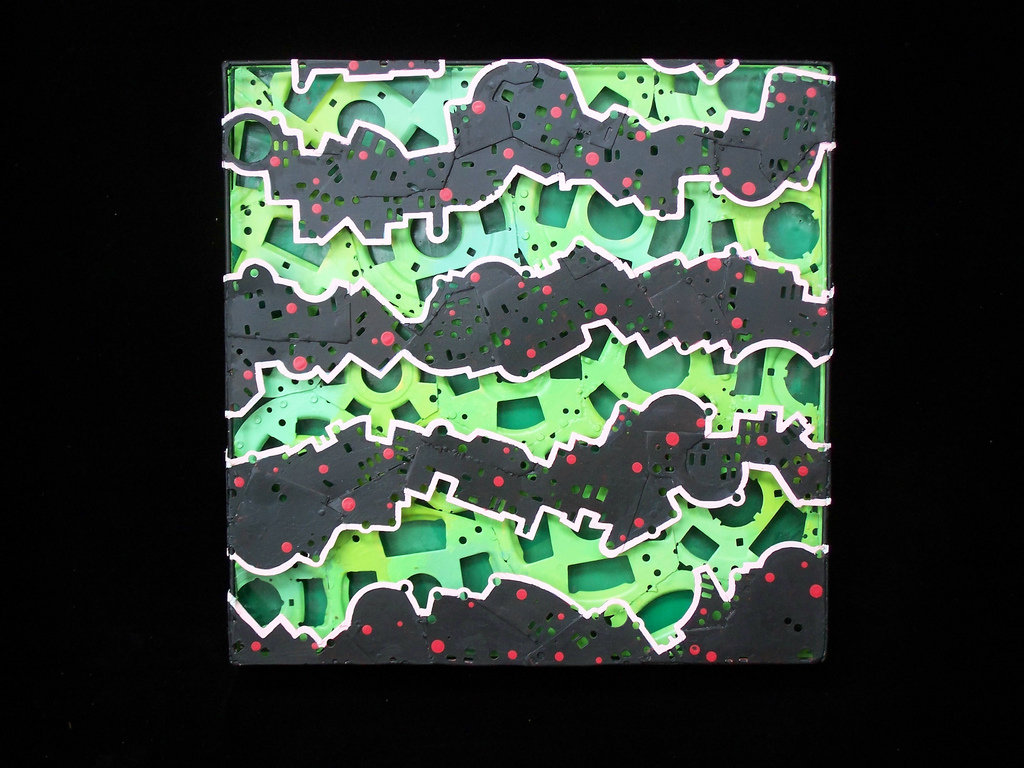 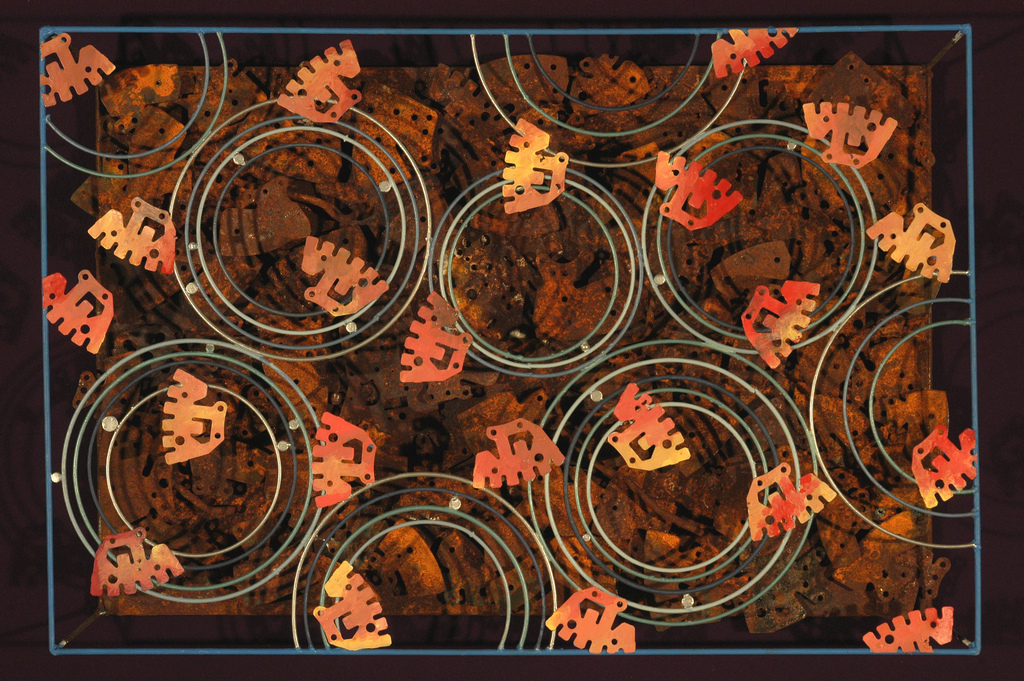 The Strata series 1) uses car parts almost exclusively. 2) is constructed of layers separated by from 1/2″ to 1″. 3) is created sing the “response” method. 4) structure is first then colour.

I use car parts mostly because I want to make something benign from something, the car, that I feel is malignant. Car parts come in a vast array of sizes and shapes. To fabricate even a single part similar to the complexity of a car part would consume much of my time. So, in a sense car parts are a short cut to the rich metal tapestries I want to create. The fact that they are mass produced and relatively easy to acquire makes them less “precious”. Mass production allows ready symmetry, patterns and a kind of animation in that a group of identical parts can move from a whole part to a partial part in a series of reductions.

By the response method, I mean that these pieces arise from a kind of dance with the parts, I have no idea what the piece is going to look like when I begin–only through response to the parts and exploration of their interaction does the piece finally evolve.

HAPPY BACTERIA As with almost all my work, responding to materials, car parts, is my creative process.  Exploring oval shapes in separator plates from automatic transmissions and  concurrently exploring welding clutch springs together led to the concept of bacteria. I created  3 layers, a background of tire tread patterns(on plywood), a middle layer of clutch springs and seat springs and the top layer or shell of separator plates with oval pill shapes cut out of them.  These bacteria needed bright colours and the surface shapes needed enhancing with dots.

HOLSTEIN SPRING began with an exploration of car seat springs. Fascinated by the curves, I began to bend them and began to get “cloud shapes”. Separator plates from between the valve bodies of an automatic transmission with their myriad perforations made a great material for the “clouds.” The clouds and the springs formed a layer which began to be influenced by my love of aerial photography. Old galvanized roofing with the ridged patterns made excellent “fields”. Finally, I traced the cloud shapes onto the  fields as painted shadows.  HOLSTEIN SPRING measures 36 x 30 x3 inches.

MECHANICAL LANDSCAPE 2 began as what I call a hood skeleton from a Honda. Hoods come with 2 layers, the skin and the skeleton or frame. This particular hood skeleton was amazingly asymmetrical for some mysterious reason (nothing about the engine or components seemed to have anything to do with the skeleton shape.) Circular parts are often difficult to deal with as a circle as a certain immaculateness, but in this case I imposed a circle onto this amorphous shape. Aerial photography has some influence as the muffin tins I added to the piece reminded me of fuel storage tanks. I always add colour as a second step, making the layers so they can b e disassembled, painted and reassembled.
MECHANICAL LANDSCAPE 2 is 36 inches in diameter and 3 inches deep. 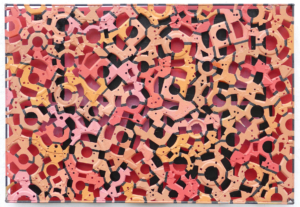 When I take apart manual clutches, I find an amazing array of parts. It is the discovery of these parts that makes the process of disassembly less tedious. GRIDLOCK is made from one of the core parts. These core parts  are almost as unique as snowflakes in that each make, model, and engine type seems to have it’s own design. For the most part they are round. For this piece I faceted the circles welding them into a single layer. By defining mecho-organic multi-coloured shapes I broke up the surface ino what feels like an approximation of a traffic jam. On the background I painted a message in red and black.
GRIDLOCK is 25 x 37 x 3.5 inches 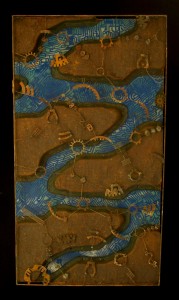 PETRO-CANYON started as an exploration of identical oil pans from transmissions. As I responded to the negative spaces between them, a sense of  a river or headlands emerged. From there,  I added a background pattern derived from automatic transmission valve bodies in blue and silver. The top layer made from some of the smaller delightful parts I find dismantling transmissions reminded of petroglyphs which seemed to fit in well with the canyon feel of the headlands.
PETRO-CANYON is made slightly tapered (it felt better that way) 48 x 29 x 3CARNIVAL is a multi-layered work made form a variety of car parts including a car door inner panel (the best part), clutch springs, automatic transmission and manual  clutch parts and flanges from oil pans.  Once the structure was finished, the layers were cut apart, painted and re-welded. 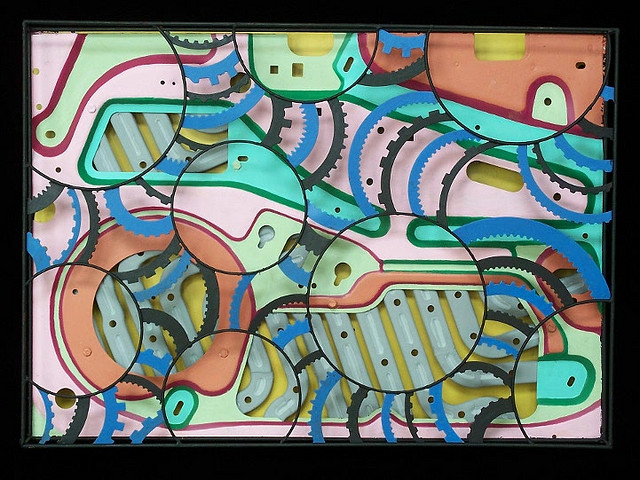