You are here: Home1 / STRATA SCULPTURE

The Strata series: 1) uses car parts almost exclusively, 2) is constructed of layers (1/2″ to 1″ depth),  3) is created using the “response” method, 4) has colour decisions made after the structural ones.

I use car parts mostly because I want to make something benign from something, the car, that I feel is malignant. Car parts come in a vast array of sizes and shapes. To fabricate even a single part similar to the complexity of a car part would consume much of my time. So, in a sense, car parts are a short cut to the rich metal tapestries I want to create. The fact that they are mass produced and relatively easy to acquire makes them less “precious”. Mass production allows ready symmetry, patterns and a kind of animation- in that a group of identical parts can move from a whole part to a partial part in a series of reductions.

By the response method, I mean that these pieces arise from a kind of dance with the parts. I have no idea what the piece is going to look like when I begin–only through response to the parts and exploration of their interaction does the piece finally evolve. 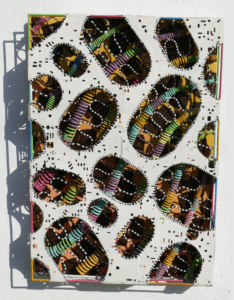 HAPPY BACTERIA: As with almost all my work, responding to materials, car parts, is my creative process.  Exploring oval shapes in separator plates from automatic transmissions and  concurrently exploring welding clutch springs together led to the concept of bacteria. I created 3 layers, a background of tire tread patterns (on plywood), a middle layer of clutch springs and seat springs and the top layer or shell of separator plates with oval pill shapes cut out of them.  These bacteria needed bright colours and the surface shapes needed enhancing with dots. 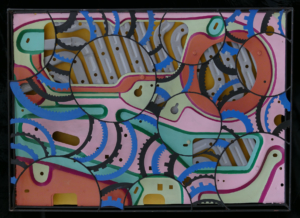 CARNIVAL:  A multi-layered work made form a variety of car parts including a car door inner panel (the best part), clutch springs, automatic transmission, manual clutch parts and flanges from oil pans.  Once the structure was finished, the layers were cut apart, painted and re-welded. 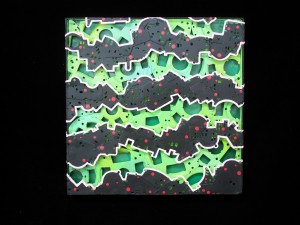 ELECTRIC WATERMELON just flowed from my response to separator plates from an automatic transmission. As with all my work, colour comes after structure is finished so I actually have to make these pieces so I can take them apart once the structure is finished. I just tack weld the joins between the layers, cut them when finished, paint the layer, reweld the joins and touch up any paint damage. In this case since the last layer is “wrapped” around. the last layer was painted in place. The middle layer is assembled clutch components and the back layer is sheet metal painted turquoise. 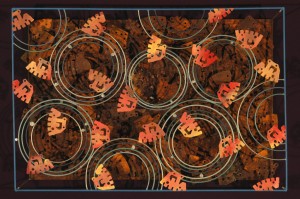 Made entirely of recycled manual clutch parts, AUTOPUDDLE springs from the artist’s appreciation of a part, in this case a “spring” that has a complex shape ( it can be seen on the upper surface of the piece)–the whole work derived from the artist wanting to interact with that part and enhance the feeling that it brought to him. As the top layer developed, the artist began to sense a water theme and from there thinking of the drawing by Escher of the woodland pool with leaves on the surface., the artist began the lower layer as the detritus at the bottom of the puddle. Colour was added to the top layer while the lower layer was rusted.

Another detail of this piece to note is that the upper layer is larger than the lower layer giving the piece a reversed truncation. While the artist constructed the piece by response, in hindsight, he can see that this truncation is inspired both the the topography of a puddle and by the concept of refraction. 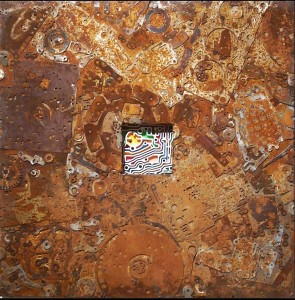 HUSK to some degree came out of the artist’s background in pottery. Having used molds commonly for his clay work, the artist created a wood “mold” for this piece allowing him to work from the outside in. This meant that the low relief surface was built up by layering recycled car parts into the mold. This process kept the welding hidden. The final layer was recycled olive oil cans (you can see the printed sides of them on the back of the piece). A central void was included, which once the artist removed the piece form the mold, he felt should be something complex and colourful. The artist chose an aluminum valve body from an automatic transmission for the complexity and the pattern was enhanced through colour. Husk actually is fairly light weight, but gives the impression of great mass. 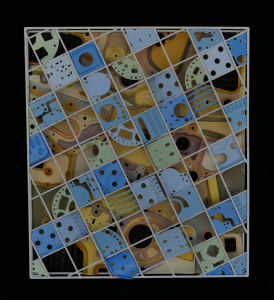 The artist had completed 2 of the layers for MECHANICAL LANDSCAPE1, but was struggling with the top layer when one night he dreamed the diagonal square grid. The initial response was to an inner car door panel. The artist added simpatico parts to complete the middle layer and assembled springs from clutches for the bottom layer. The grid top layer allowed the artist to showcase areas of parts on the surface while framing views deeper into the structure. Adding to the dynamic nature of the layered nature of these sculptures, the artist allowed pieces to come off the plane of the grid.28 x 25 x 4 inches 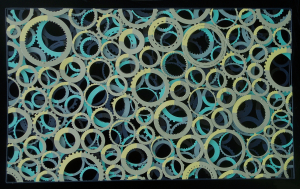 AUTUMN BEACH is one of the Strata series wall-hung sculptures consisting of stacked screens or layers. In this case, the screens are constructed from automatic  transmission clutch parts. The sculpture is 63 x 30 x 3.5 inches